Mr. Frankie Speedo Bear enjoys a day at the beach and why wouldn’t he when he looks so handsome!

Seriously, I think he is adorable. Who’s with me on that?

Mr. Frankie Speedo Bear is not all I have for you today
because it is the 15th of the month which means it is
reveal day for my new marygunnFUNN Pajama FUNN Party which is No Worries!

As a thank you gift for purchasing the No Worries Workshops Your Way Scrapbooking kit from me, I will help you turn this 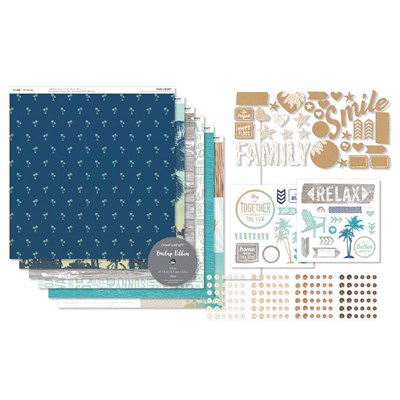 which is five 2-page 12″x12″ layouts and one bonus mixed media-esque page just for FUNN!

You will also need Colonial White, White Daisy cardstock for bases and cardstock for your mats as mats are not included.
Be sure to check your supplies for adhesive and a sharp trimmer blade (or trimmer).

Pretty cool transformation, huh?
Almost as cool as being at the beach with Annette Funicello and Frankie Avalon!
By the way,
there are seven of these movies if you are interested in having a
No Worries Pajama FUNN Beach FUNN Party!

Some of those dance moves will whip your abs up or get the “flabs” whipped up!

The young bear couple is sporting a lovely coordinating Little Dreamer swimwear ensemble. Adorable, isn’t it?
Looks like Annette FUNNicello Bear forgot to wax her tummy before she went to Malibu. Please note her akimbo arm to accentuate her slim waist!
Don’t you love that beach bag?

I wonder if it is because I am reading “Fried Green Tomatoes”, but Annette FUNNacillo looks like Evelyn Couch to me.

Just saw this vid – so true!

The Beach: Pre-kids VS Post-kids

An incredible thing happened to the bears while on the beach!
They made a rare an exotic sighting of a MER-bear!
She still has water droplets on her fins.

She was sunning right there on No Worries Beach!

So they asked if they could have their pictures taken with her and of course, she said, “Yes!”
She, then, asked Annette to take her to the beach cafe where she saw Terri Howard and the Cabana Boy!
That, my FUNN friends, is another story!

Frankie Speedo Bear is not included (shucks) in the PJ FUNN Party, but look how well he looks on site!

Annette and Ms. MER-bear went for a drink with Terri and the Cabana Bear.
They got the kind of cute drink with an umbrella in a coconut shell.
So we got Frankie Speedo to pose for a layout shot.
He looks so lonely without Annette FUNNicello Bear!

THIS JUST IN – GOING TO POST THIS RIGHT NOW SO YOU CAN GET YOUR CARDSTOCK DEALS!

PLEASE DON’T FORGET TO ROUND UP YOUR ORDER AT CHECKOUT TO DONATE TO OPERATION SMILE!

I hope you are having more FUNN today than you can BEAR!
As hard as it is to fathom, I have more BEARS for tomorrow!

XOXO and have FUNN,

Want more Bear FUNN?
Here are some of my past BEAR posts (plus keep coming back for more)!
Share BEAR Week, I’d be ever so thankful.

Mary Gunn FUNN is the host of Craft Roulette, Cut The Crap & Create, FUNN University Live, and other special events. She has combined her love for teaching and paper crafting to create a different kind of paper-craft media.

Comments are closed for security. Please contact Mary on her socials!

Support our efforts by purchasing swag!